Monoids in Theory and in Haskell

This is the second in a series of posts about category theory and its relationship with Haskell. We’ll be exploring monoids in this post!

A monoid is a mathematical object, just like a category, which we explored in the last post. Intuitively, a monoid is a structure which encodes the ability to concatenate two things, and a zero-like element which, when used in concatenation, does not affect the other element. Let’s look at a typical mathematical formulation of a monoid:

I wouldn’t be surprised at this point if, even without a heavy mathematical background, one could come up with an example of a monoid. Let’s look at a couple.

In the programming world, monoids show up all over the place as well. A well-known monoid, using haskell syntax, is {[a], (++), []} – the monoid of lists under concatentation with \(1\) being the empty list.

The monoid (in haskell)

As a haskell programmer, the aforementioned definition for a monoid looks awfully familiar. The typeclass for Monoid looks almost the exact same, sans axioms, and modulo names, as the traditional mathematical formulation:

We can even encode the three examples of monoids mentioned above in a very straightforward way:

We have to verify that our instances follow the laws, which translated to haskell look like this:

It is not so hard to reason through these laws for the instances listed above.

The monoid (in category theory)

We’re not done quite yet, because category theorists have picked up on a quaint definition of a monoid:

A monoid is a category with one object.

Well, that’s convenient. But what is really going on here? Let’s look at a visual representation of the category theory interpretation of \(\{\mathbb{Z}, +, 0\}\) that we saw before*: 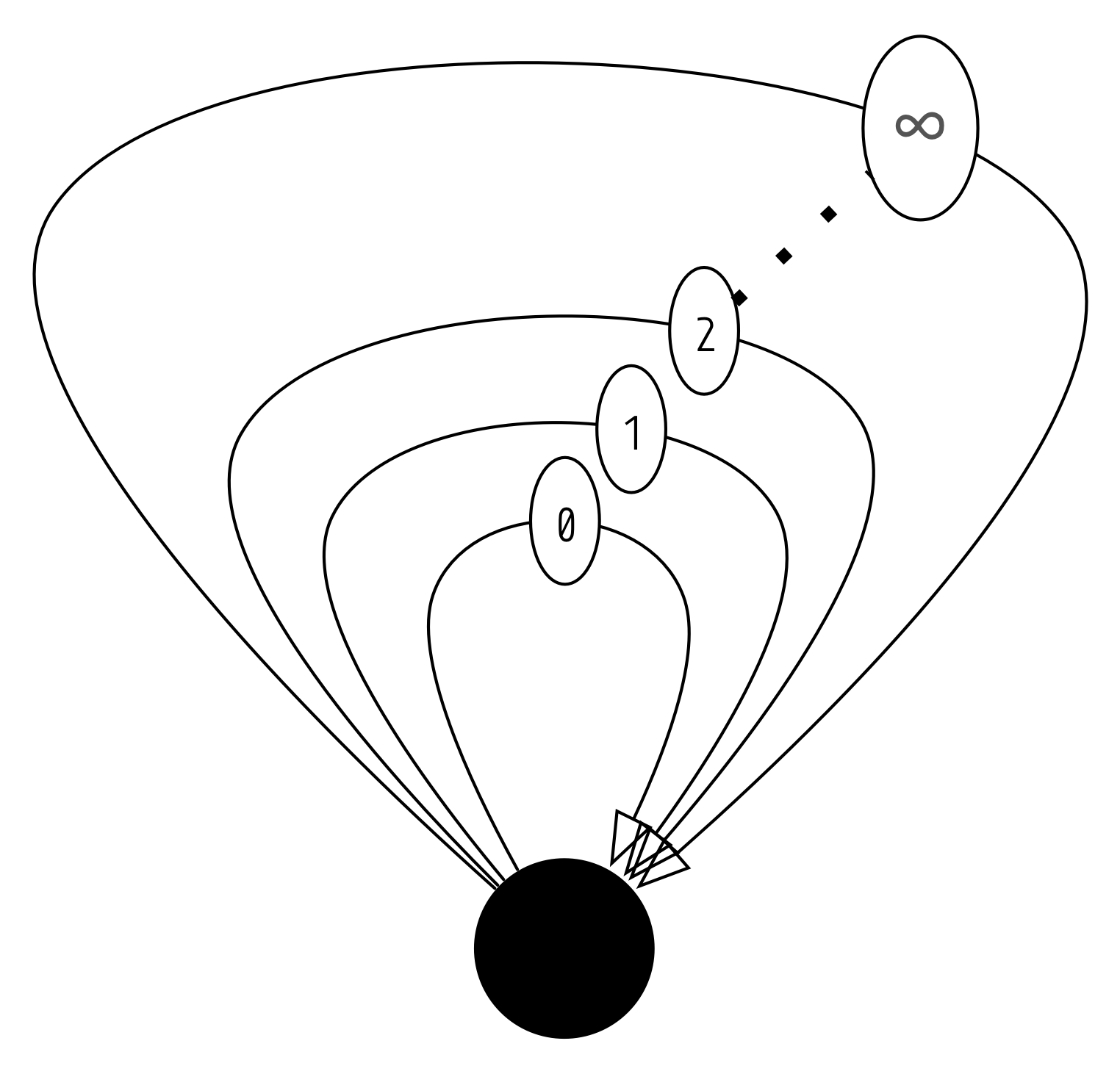 * The image gets a little messy with the negatives, but those are valid arrows as well.

Morphisms in our category are elements of \(\mathbb{Z}\). This can be confusing if we have some expectation about the way arrows should look. But, recall that to define a morphism, we only need to be able to assign a source and target to them, which are totally abstract concepts. Our set of morphisms is then exactly \(\mathbb{Z}\), where we just pick the same source and target for every single element.

Composing these arrows gives us something that looks like this, intuitively:

Composition is addition, so this is equivalent to:

An important thing to note here is that the object doesn’t really matter. The above diagrams should make sense regardless of what the source and target of the arrows are, as long as they’re the same thing. The source and target must be the same so we can compose freely. If they weren’t, we wouldn’t be guaranteed to “have access” to the start of any arrow in our monoid at the end of any other arrow, which would disallow composition. This means we necessarily only have a single object in our category.

The tricky thing here is that in category-theory-land, the morphisms might not really look like functions, or even arrows, as we might expect. An integer as a category morphism follows the laws if we plug in the right \(id\) and \(\circ\), and that’s all that matters.

Let’s formulate the aforementioned Sum as a legitimate haskell Category (C for Category):

We can use GADTs to encode the monoid (read: category with a single object) of integers under addition. We are saying two things here:

In effect, if we view SumC as cat (the type of morphisms in a category), we can encode the monoid \(\{\mathbb{Z}, +, 0\}\) exactly as a Category. If you look closely, you’ll notice that we only have a single object in our category, and we don’t care what it is. This is exactly a. A SumC can only be constructed in one way, namely, by asserting that its source and target is a. The identity arrow is 0, which we’d expect, and composing two arrows is adding their Integer values.

The category laws all hold, which you may check. This instance acts exactly like the builtin Monoid instance for the Sum we saw previously, modulo operator/function names*:

Just like with a Category, this isn’t the only Monoid you can encode – you should be able to use this type of construction for any haskell Monoid.

Note that I wouldn’t actually recommend doing this in practice; it’s mainly a mental exercise. That said, I think it’s pretty cool that we can get very close to a category-theoretic formulation of what a monoid is in Haskell!