Graphs and Topological Sorting in the Functional Paradigm

What is a Graph?

Simply put, a graph is just a bunch of points with links between them. A road map is a simple example: roads being edges, and intersections being vertices. In fact, Google maps uses graphs for just this purpose! Graphs are widely used in a wide variety of places. Facebook uses graphs to model your friend connections and likes. In fact, the entire internet is just a giant graph; websites act as vertices, with hyperlinks as edges. Graphs are highly useful structures, as they can be used to model many different types of situations, and as such, they will be the focus of this blog post. I am going to discuss one way to represent a graph in the Haskell programming language, and how to functionally solve a common problem using graphs. Graphs are often represented visually like this: 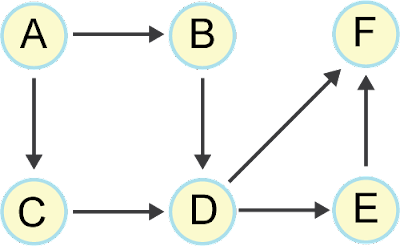 This graph links the first six letters of the alphabet in an arbitrary way. This data doesn’t really mean anything, but it will serve as a simple foray into the world of graphs, and provides an initial graph to work towards representing in Haskell. Let’s get right to it; here’s the data structure we’ll be using, along with some convenience methods:

First we define the actual Graph a data type: It’s simply a set of vertices and edges in the form of 2-tuples (The tuple (a, b) connects vertex a to vertex b), which fits our definition. I’ve also defined the removeEdge method, which does just what you’d expect. The outbound and inbound functions find the outbound and inbound connections to any point in the graph, respectively. They make use of the polymorphic connections method in order to get this done in a small amount of code. Finally, the Graph module exports the relevant functions at the top of the file. Now that we’ve got our framework in order, we can go ahead and build the graph we mentioned above:

We import the Graph module and define a simple Letter data type, then build our Graph from it. The set of vertices are the letters A, B, C, D, E, and F, and the edges are modeled as above. Now that we know how to build graphs, we can start modeling more important information with them.

Suppose some of the characters from NBC’s *Parks and Recreation*have just finished competing in a dance competition, and we know the following about their rankings:

This is a little hard to mentally parse, so why don’t we model it as a graph to make it a little more readable? Each person can be represented as a vertex, with outgoing edges representing connections to the people they beat. 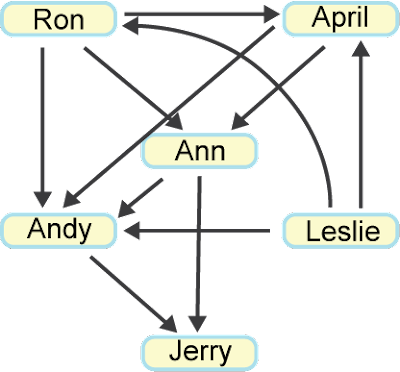 A graph of dance competition results

It would be nice to be able to be able to read scenarios like this from a text file containing the important data and parse it into a graph. Let’s go ahead and set up a function to do this for us, so we don’t have to hard-code each and every graph that we want to use: Here’s our data file, with a list of space-separated connections, one on each line:

And our parsing function:

The graphFromFile function takes a String and returns an IO (Graph String). The function reads a file, parses it into two important pieces: verts (the set of all unique strings in the file, or, our vertices) and conns (the set of connections between strings in the file). It then builds a Graph from this data, wraps it in the IO monad with return, and gives it back. Now you might have been wondering from the beginning of this section what the ranking from the dance competition was (maybe you even figured it out on your own!). How do we do this programmatically, using our graph?

In computer science, a topological sort of a directed graph is a linear ordering of itsvertices such that, for every edgeuv, u comes before v in the ordering.

In our case, this just means that each person must come before allof the people that he or she beat in the competition, in the ordering. The basic procedure for topological sort is as follows:

If you do not understand this, I urge you to work through topologically sorting a graph on paper first; it’s not too tough to understand once you’ve done it on paper, but can get a little confusing in psuedocode. The problem with this algorithm is that you see a ton of loops – control structures that we do not have in Haskell. Therefore, we must rely on recursion, folds, and maps to achieve what we want to do. Here’s how it looks:

Our tsort function first finds the elements in the graph with no incoming edges using the function noInbound. We pass this into a sub-routine tsort' that takes a sorted list l, a list of vertices with no incoming connections (n:s), and a graph g. We operate on the first element of the set of vertices with no incoming connections n, finding outEdges (the outgoing edges from n), and outNodes (the nodes that n points to). We build a new graph g' with the outEdges removed, and find the nodes in g' with no inbound connections, and add them to s. We then recursively call tsort' with these new parameters (and prepend our current n to the sorted list), until there are no more nodes to check. At this point, if the edge list in the graph is empty, all is well and we return the list of sorted elements. Otherwise, an error is thrown stating that there is at least one cycle in the graph. Now that we’ve got that, we’re ready to find out how everyone ranked in the dance competition!

As you can see, Graphs are very useful data structures. They can be used to model a huge variety of things (see how many more you can come up with, they’re everywhere!). Topological sort in particular is a pretty remarkable algorithm, and can be applied in many different situations from the one above. For example, finding paths through college courses with prerequisites. It’s even used in UNIX systems to schedule processes according to their dependencies.