I’ve been creating Generative art consistently for about six months now. People are starting to ask what my stack looks like, and until now I haven’t had anything to point at; I’d like to change that today! I’m going to lay out my approach in this blog post, and we’ll put together something simple using the stack I’ve been using to generate art.

The long and short of it:

Here’s what we’ll be making: 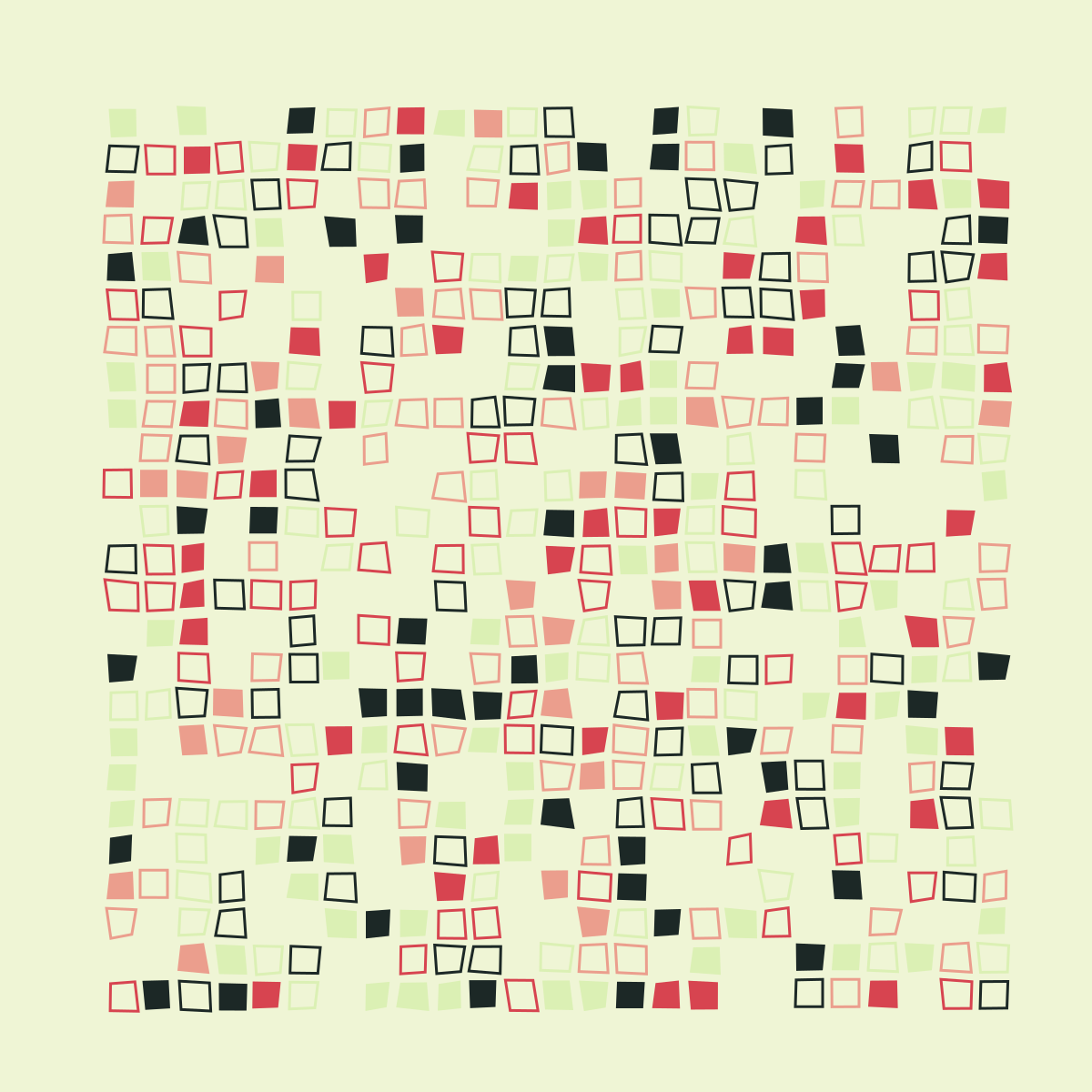 I’m assuming some familiarity with Haskell in this post. I’m happy to help others learn, but won’t cover some of the minutiae here - my contact information is totally open if you’d like to reach out!

You’ll need the following Haskell packages to run this script, if you want to follow along:

Cairo is a 2D graphics library written in C. It’s pretty low-level, and handles things like drawing lines, rectangles or circles on a digital canvas. The specifics aren’t super important here, but it’s good to know what a surface and a source are.

For our purposes, we can consider a surface to be something like a canvas - a drawing surface. A source is a medium - the “digital paint” we use on the surface. In our case, this will only ever be a flat color. It can technically be a gradient, a texture, or even another surface.

First off, I’ve been writing Haskell code for a long time. I’m very familiar with it, so it was very natural for me to try out this workflow. My choice to go in this direction is largely rooted in familiarity. I followed Tyler Hobbs’s lead for a little while, writing Processing code through Quil in Clojure. It worked really well for a while, and I learned a lot of fundamentals regarding generative art (and Lisp!) this way. However, there were some things I just never got quite working, and I didn’t feel like I was as productive as I could be. So, I gave this new stack a shot.

Pretty immediately, I saw some improvements:

I switched my genart stack to haskell/cairo a few days ago. Here's what changed:

- Deterministic random generation (seeding works across many libs)
- Image generation is super fast
- Image scaling is much easier
- Moving stuff around is slower, but usually correct

For context, I never got seeding working in my old stack. In Haskell, pretty much every library involving randomness works with StdGen (which is part of the standard library, and has a nice API). Scaling images is just a matter of applying a scaling matrix to the whole image (we’ll see this later); it was a pretty manual process before. Changing code around is a bazillion times easier because I don’t really have to worry about messing my data types up - typically the compiler will yell until it becomes satisfied, at which point running the code does what I’d expect*.

* Not always, of course. But the adage of “if it compiles it works” does have some merit, especially in the world of generative art, where happy accidents are totally welcome.

I know that these things are totally possible with my old tech stack, I just didn’t find it intuitive for some reason. These things frustrated me to the point where I wanted to try something new.

How about some code?

Okay, first we’ll import all the libraries we need and set some GHC extensions:

Now we can talk about our domain.

The World type just holds all of the information we may want to access at any point in our program.

An expression of type Generate a wraps three distinct types of functionality in the following layers. Working from the inside out…

The result is a type that allows all of those side effects to coexist, but effectively separates randomness and rendering. We can write functions of type Render a and lift them into the Generate context when needed, effectively separating random generation logic from rendering logic.

I’ve written a short helper function because lift . lift gets annoying to type after a while and doesn’t communicate intent very well:

Those are the basic building blocks that will let us interface with the libraries we need. There’s some boilerplate/setup we’ll need to run Generate expressions, so let’s get that out of the way and get something (nothing?) rendering:

We’ll fill out renderSketch in a minute, but for now it’s just an art generator that does absolutely nothing. The rest of this is sort of important.

First, we grab the current POSIX time in milliseconds for use as our StdGen seed. This is important because it lets us re-use the seed to re-generate the artwork if we need/want to. Some initial variables are set, like the width, height, and how much we want to scale the final image. We create an image surface in ARGB32 format to write to, and initialize our World. The next blob runs the renderSketch action with the program’s parameters we just set up. Before rendering the sketch, we can scale by a specified amount (in this case 20), which will effectively “blow up” the image without losing any quality if needed. The next two bits just write out the file to two locations: A timestamped one, which gives us the “seed” value, and a special file called latest.png that just holds the last image generated.

Just a couple of things about this:

The rest of this post will focus on filling out the renderSketch function, which will actually render something to our Surface.

Refresher time. We are trying to get here:

Generating the background would be a good start, so let’s do that.

Okay that’s a bit more code, sorry. Still have a bit to set up because cairo is a pretty low level library and we’re building from scratch.

I consider Double -> Render a to be the type of a Color, which might seem weird. But I want to be able to control opacity, and don’t consider that a part of a color’s definition. However, it’s a tuneable attribute of color, so this representation works nicely.

Anyway, when we run this script, we should see a completely eggshell square: 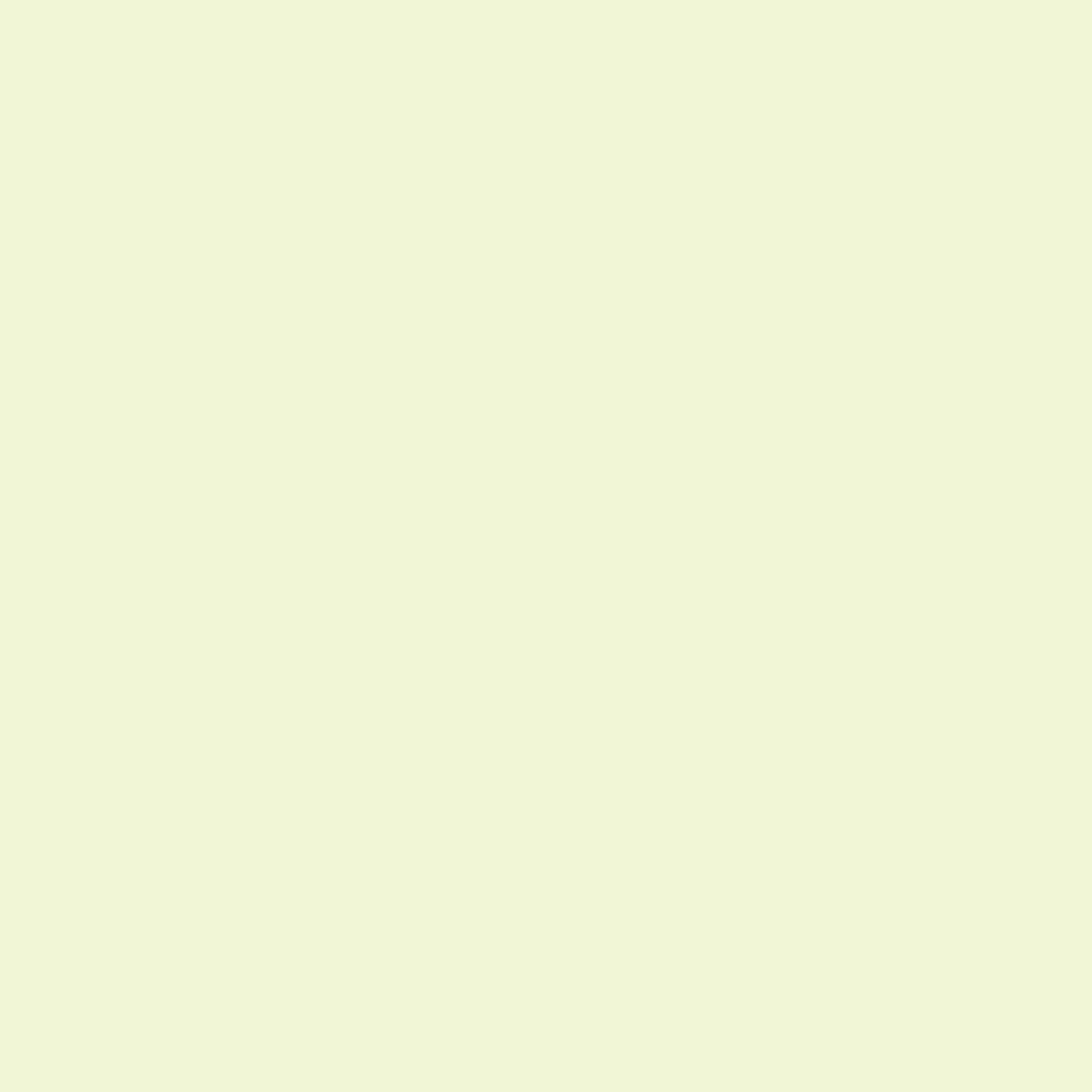 Progress! The next step is to draw a grid of quadrilaterals. Notably, we’ll need a concrete notion of two things:

We’ll start by generating perfect squares, and then add some variance to those squares later.

Points on a grid

Well, first we need the idea of a Point in 2d space. Fortunately the linear library comes in handy here with its V2 type. V2 Double will do (a two dimensional vector of Doubles).

For this program, a Quad (quadrilateral) is well-represented by four points in space. I’ve arbitrarily chosen them to be in counter-clockwise order, starting from the top left:

* Note: I totally draw little ascii drawings like this in my comments all the time. It helps!

A simple way to think about points on a grid is a V2 Int - that is, a vector with integral coordinates. Let’s go that route for now, and generate some Quads!

We produce a grid of quads by:

* Another way of dealing with this would be to double the scaling, and half the width and height, and just use any integer coordinates. But this works too and lets us adjust the margins a little better (with 3 padding vs 2 or 4)

Armed with this, we need to be able to render the Quads by drawing the path around them:

Then we can render the grid: 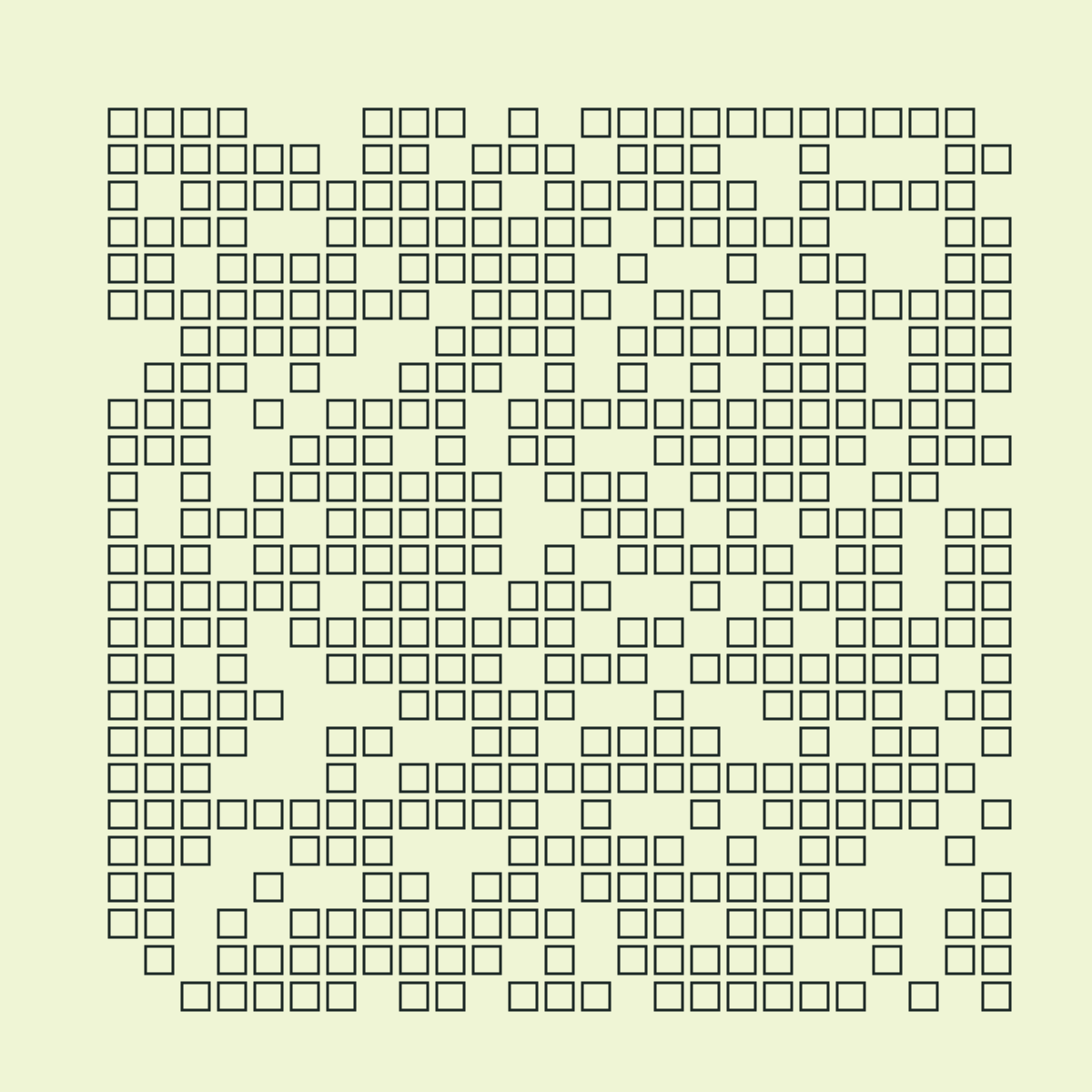 A large chunk of this is just interfacing with the hsnoise library. There are some parameters we need to provide to P.perlin that you can largely ignore. Check out Adrian’s Soapbox for a good explanation, if you wish. The key piece here is that the worldSeed is added to the x and y values here when passed into the perlinNoise function. If this was not added, we would see the same variance every time. The short way of saying this is that Perlin noise is deterministic; we can introduce variance by offsetting by our (varying) seed.

The attentive reader might recognize that the only reason we’re really in Generate here is to get access to the size of the surface. This could also have been written inside the ReaderT World layer just as well and lifted into the Generate context later.

Applying it, we get a some wiggly quadrilaterals: 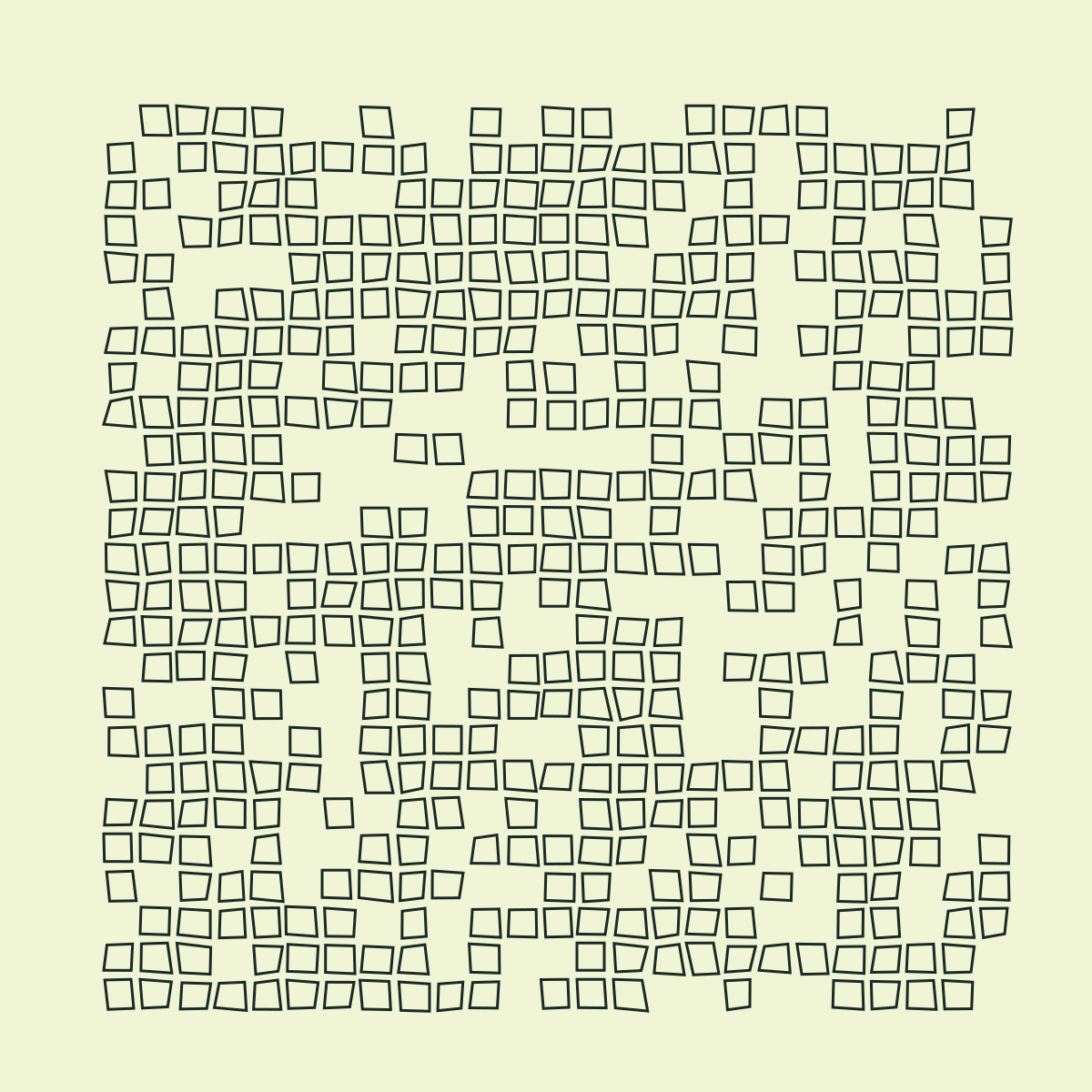 We’re very nearly there, but still missing a couple of points of variance:

This is best illustrated with code. renderSketch becomes:

We use two functions from MonadRandom here:

Rendering has been lifted with cairo into it’s own block inside the for_, instead of wrapping the whole thing, to allow for random generation within the loop.

I used this seed to generate this final image: 1520476193207. If you’ve been following along, try fixing the seed and generating it on your own!

One thing I haven’t shown off is that you can screw around with anything inside a Render block without affecting the RNG. Try changing the colors around and running this program with a seed you’ve previously used. You’ll get the same structure and distribution of color, but different colors! You can also change things like the scaling of the Perlin noise, or even screw around with the general idea of rendering a quadrilateral, all while retaining the same randomness properties.

It’s not too hard to hook up random-fu to this little framework, which extends its capabilities with e.g. Normally distributed random variables. You can also use other random number generators, as detailed in my blog post on randomness in Haskell.

Where did the colors come from?

coolors, a handy website. Here’s a link to the palette we used.

A number of people have been super helpful and inspirational to me. To plug a few other generative artists doing cool stuff, check out the work of Tyler Hobbs, Anders Hoff (inconvergent), and Manoloide. Visit r/generative for even more good stuff.

Also a huge thanks to the Gtk2Hs team for the cairo bindings, wihout which all of this would not be possible.

Where can I see your work?

I’ve just recently set up a bigcartel shop here, where you can view and purchase my work: bigcartel link. You can also follow me on instagram or twitter, where I’ve been posting frequent updates.

I hope this post provided a glimpse into my general artistic process. as always, feel free to contact me if you have any questions or comments.